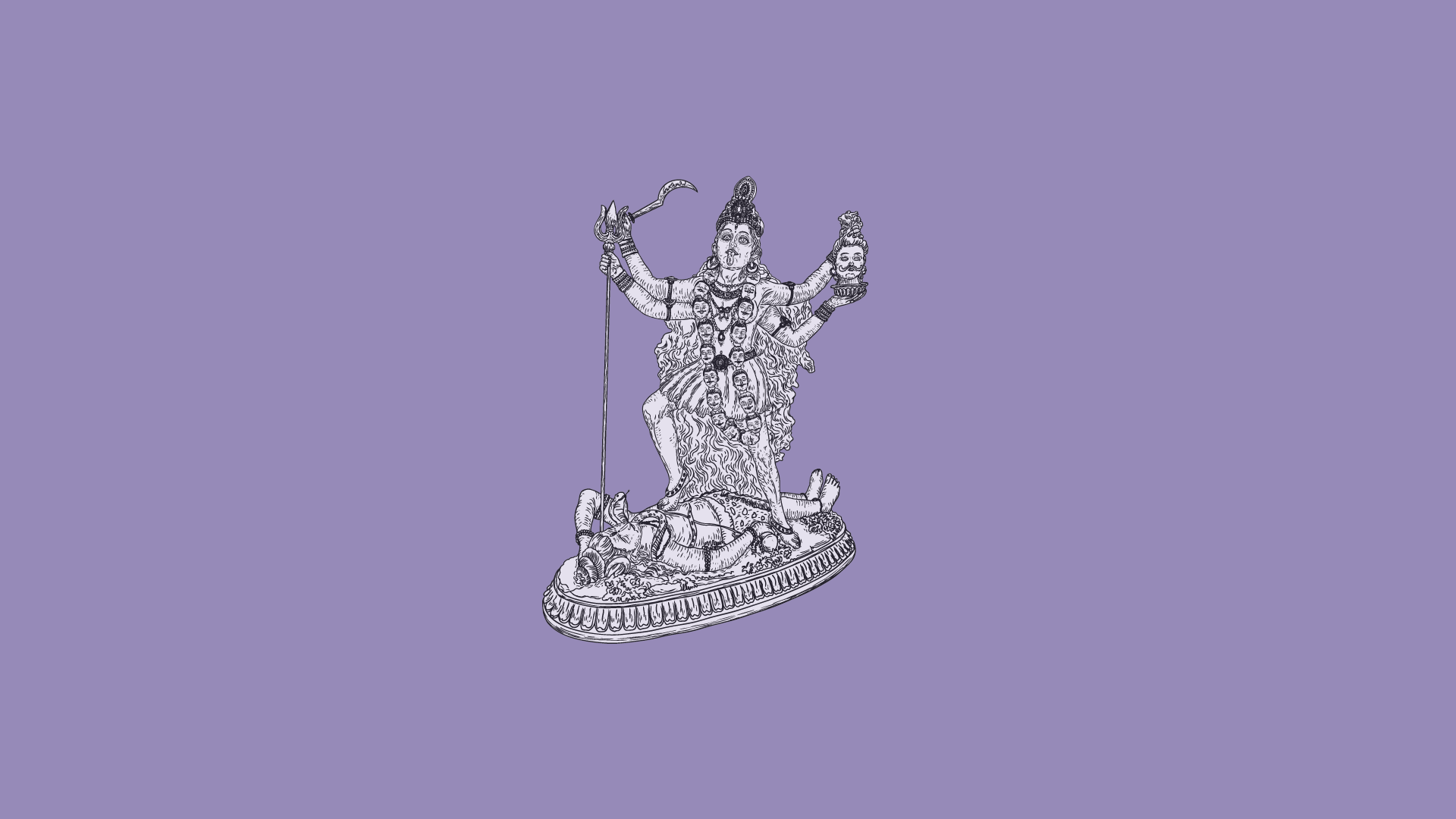 If there were ever a year to embrace the teachings of Kali, 2020 is definitely it. Kali is the Hindu goddess of revolution, transformation, time, and change. She is one of my favorite goddesses because she is a total badass and her teachings bring with her the gifts of freedom and truth.

The teachings of Kali can be seen in the material world during times of global change, pandemics, social unrest, and death. In the inner world, Kali brings with her an invitation to freedom through destroying ignorance and the illusion of duality. She can also be a present force during shadow work, or coming to terms with the unconscious parts of our personalities.

It’s important to note that the goddess Kali includes a vast body of work, study, and varied understandings. For me, Kali has been a powerful archetype and tool for self-discovery. If you’re just meeting Kali, get ready for a wild ride! If you are deepening your relationship with her, and yourself, I hope this article inspires you to dig deeper.

Let’s jump into four teachings of Kali and how they can be used as a tool to deepen self-awareness and be a little more fierce!

Kali is usually found rocking out with a long tongue and fangs hanging out of her mouth, and adorned with the heads and arms of her conquests resting on her glistening obsidian black or indigo blue skin. Her rolled out “tongue signifies the yogic desire to lick up the blood of desire that stray us from our path.”(Kempton, Awakening Shakti)

Her four arms splayed out, one holding a severed head, one holding a weapon dripping in blood, and her other two hands in symbolic shapes: one of bestowing boons and the other of protection. Many depictions include Kali with her right foot on top of her prone consort Shiva, which we will dive into below.

The Story of Kali

There are many stories of Kali; perhaps the most famous is the story of the goddess and the great demon Rakta-bija from the Devi Mahatmya book. In this story, it is said that Kali sprung from the third eye of the goddess Durga to help her in ridding the world of demons. Rakta-bija was one of the worst of the demons; if you cut him, from his blood would spring new demons. So when Kali slayed him, she used her long tongue to lick up the blood so no more demons would emerge.

Throughout the battle she wielded her anger to slay the evil of the world and protect the innocent. Her bloodlust ran wild though as she devoured the demons until her consort, Shiva lay himself upon her path to stop her from spinning out of control. One interpretation of this aspect is time (Kali) dancing around the unchanging universal consciousness (Shiva).

Many of the stories from the hindu pantheon of gods and goddesses can be understood as more allegorical interpretations of understanding the human condition. So what can we learn about the human condition from this goddess of revolution and time?

Teachings of Kali #1: Be Fierce

As the great slayer of Raktabija, Kali has come to represent taking action against injustice. Throughout the story, she uses the power of her anger to protect the world, reminding us that anger is a valid, necessary, and important emotion. When wielded properly, anger can be transformative.

An example of this could be seen in the #MeToo movement. People acknowledged the wrong that they had suffered and used their voices to speak out to create change. Standing up for themselves by speaking out inspired a contagious Kali movement where more and more people found their inner strength to cut the heads off of the demons. Those fierce humans made space for change by using the power of transformative anger, where in the past so many stayed silent.

Many spiritual teachings focus on the importance of being peaceful and transcending negative emotion which can result in repression and spiritual bypassing. Kali asks us to be honest and speak up. Her strong, steadfast actions protect the world from the evil that had been wreaking havoc. The story of Kali is a reminder to take action against injustice, evil, bigotry, and ignorance, in ourselves and others.

Teachings of Kali #2: Chaos is a Great Teacher

Coming into a time of mayhem in our lives can feel like the world is totally against us, right? It’s easy to fall into a well of self-pity and ask “why me?”. (I know I’ve definitely been there before.) Kali asks us to see the chaos as a great teacher.

For example, many people found themselves this year without a job, quarantined away from friends and family, and some of us even lost loved ones. Kali asks us to walk through the storm and find ourselves in the center of it as opposed to being swept up in the winds. If we can make our way to the eye of the storm, where it is quiet and we can observe the turbulence all around, we can take a moment to ask the important questions. These questions could look something like:

Ultimately, in chaos, we have an opportunity to feel certain things very deeply as well as gain clarity on what we are ready to let go of. Maybe the job you’ve had for the past several years has been great and you found a renewed sense of gratitude from missing being at work. Alternatively, maybe you felt a profound joy by not having to go into a job you really didn’t like and now you have space to create a new career path.

These lessons are definitely not comfortable and often we have to sit in the dark for awhile to get to the other side of clarity, which brings us to the next lesson.

Teachings of Kali #3: Darkness is Beautiful

Darkness gets a bad wrap: the werewolves come out, someone “left me in the dark”, the great vast unknown…these phrases evoke a sense of fear.Kali’s dark colors have been associated with the ultimate void state– the state in which all dissolves into nothingness (or everythingness). This state is also often associated with death, which most of us fear on some level. As humans, we really like our comfort zones, and if we aren’t careful, we can fall into a life not truly lived for fear of not knowing what’s on the other side.

(Insert cliche quote about change being the only constant here)

Darkness and change have profound gifts: growth, possibility, and hope. When we don’t know what is on the other side, that means that everything and nothing is possible. If you knew everything that was going to happen everyday for the rest of your life, you would be very comfortable, and likely very bored. Isn’t life a little more interesting with some mystery?

Kali reminds us that the darkest of places are pregnant with possibility.

Teachings of Kali #4: Conquering the Ego

Dark corners lurk inside of our minds too. Our subconscious minds can make up all kinds of stories to protect whatever is going on with our ego.

A friend of mine had come to identify so much with their work that eventually they believed it was their identity. When the pandemic hit, the possibility arose that they may not have their job anymore and it felt like they would all the sudden cease to exist. This was an intervention from Kali: stripping away all of the fluff to allow my friend to see their true selves. After awhile, they began to see that underneath all of the loss, after some time in the dark, there was a whole other side of themselves that was much truer than this work persona they had been living for so long. Kali chopped the head of their illusion off so that they could see. Their future was suddenly pregnant with possibility and opportunities began to fall in line.

In yogic philosophy, the ego is the part of us that has worldly desires. The part of us that wants to be rich, well-respected, invited to all the parties, lusted after, etc. It’s understood that these desires are also the root cause of our suffering. While that is mostly true, ego plays an important role in our lives, and if we are able to crush the idea that we are merely our egos, that suffering can be greatly reduced. Like my friend, we can see that we are most than our job, or our marital status…we are so much more.

Thanks for sticking through to the end here. I hope that this inspired a little contemplation, and maybe even some further reading. There is so much to be explored with the goddess Kali. This Thursday, December 3rd, I’m hosting a special yoga workshop on all things Kali. So, if you’d like learn more about the goddess and explore this energy through yoga asana, pranayama, meditation, and some contemplation exercises, reserve your spot here.